Gerald Ghislain and the Taste of Scent

Posted on November 19, 2010 by cocktailsandcologne 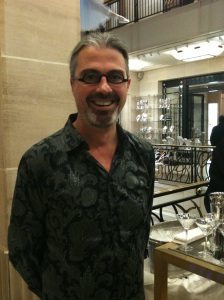 Gerald Ghislain, restaurateur, perfumer and creator of the acclaimed French niche line Histoires de Parfums, is tall and amiable Parisian with a ponytail, three-day beard, and architect-style glasses. He was bounding across Henri Bendel’s second floor fragrance section last night talking to shoppers about his fragrances as they sipped martinis inspired by the ingredients he uses in his scents.

This was the perfect event for Cocktails & Cologne: it had both of my subjects covered. I started with a jasmine tea cocktail, which a little on the sweet side, but flavorful and pleasant. I had to remind myself that this was an event aimed mostly at women (it was at Henri Bendel), so the drinks weren’t going to be as boozy as I like them.

My second drink was a lavender gin cocktail. The tall French woman serving the drinks comically breathed a sigh of relief when I said I liked it. This too, was sweet, but I liked it better. Not too much lavender though—honestly I tasted more of what I thought must be elderflower syrup (or St. Germain). I probably liked this one better because I could taste the gin. 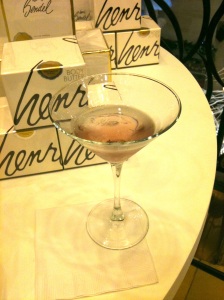 But the focus of the evening truly was the fragrances, which I will discuss in detail. Gerald Ghislain started Histoires about 10 years ago. He names most of the line after the birth dates of literary figures—Casanova (1725), the Marquis de Sade (1740)—and each 120ml bottle sits like a book on a shelf in displays.

1725 is the most classically male of the collection. Top notes are citrus, and the dry down is a mix of warm ambers, sandalwoods, and cedar with a twinge of star anise that spices it all.

1740 was more interesting, but maybe not as wearable for every day. The leather, cardamom and cedar in it is deep and pungent, and it instantly reminded me of Eau d’Italie’s Baume du Doge, which has two of those ingredients.

1969 is a unisex scent grounded in patchouli and chocolate. I liked this one, and initially thought it might be one both me and my girlfriend could enjoy wearing, but then I smelled Ambre 114.

Ambre 114 is interesting—it’s what you might get if you took the warmth out of Musc Ravageur, and I don’t mean that in a bad way. It’s got a cool (powdery?) edge to it that I can’t place—there are 114 ingredients after all. I asked Ghislain about it and he explained that because there were so many ambers out there, he had to make it different. If you love amber, this is a great variation on the theme. I kept going back to this one, sometimes put off by its coolness and other times drawn in by its freshness.

Our conversation about Ambre 114 and the quest to make something new led us to Ghislain’s newest project, a scent he’s calling 3785—a year in the future. 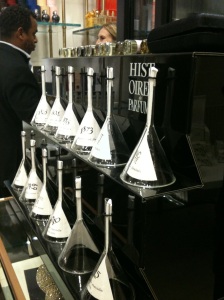 When I asked him about Ambre 114, and what was in it, it lead us to 3785. In Ambre 114, he was trying to do amber different. With 3785, he was trying to do something totally different, yet remain wearable. Since it’s a futuristic scent, he chose to use only synthetic ingredients. He told me he was striving to make something personal, something for everyday wear and not for a time of day or an occasion. He sprayed some on a card for me, and then on my hand at my request. It’s different. The top notes had me grasping. But then I thought I detected various fruits. Peach? Melon? But no, it’s not that fruity. There’s a faint powder. It’s not so unfamiliar as much as it’s just hard to describe. Which is part of Ghislain’s goal. It’s certainly wearable though, and that too was important to him. He said it will be released next March or April.

When I asked Ghislain what his favorite masculines from the line were, he immediately led me to 1725 and, interestingly, Tubereuse 3, the heaviest of his tuberose trio. He explained that while his collection was divided masculine and feminine, he didn’t think that way himself. He also pointed me to Blanc Violette, the feminine fragrance that intrigued me the most. He said this one smelled nice on men’s skin, despite it being a clearly feminine floral.

I’m wearing a sample of Tubereuse 3 today and I like it. Ghislain was right—for what should be a heavy feminine fragrance, it makes a good mild masculine. Either way, it’s a nice versatile variation on a tuberose.

I was pleased to learn that we’re not restricted to the big $185 120ml bottles: Histoires sells a travel set of three small vials for around $95, or—and they don’t like to publicize this—they’ll sell you a single half-ounce vial for $32. That makes sampling easy.