Posted on February 22, 2012 by cocktailsandcologne

Jahn Hall and Kurt Uhlendorf of BKLYN Dry Goods are an odd pair: Hall is a tall, burly guy who’s never without a disarming grin and Uhlendorf is a slighter, shorter, thoughtful-looking guy. Their business, BKLYN Dry Goods, is an online and pop-up vintage clothing shop that has been delving into styling and product collaborations. I first encountered these two bearded gents at MRket, a menswear trade show at the Javits Center in NYC, where they had created a number of trend installations for Michael Macko, a former Details fashion director. When I ran into them again at the Elements Showcase fragrance trade show a week later, I had to introduce myself. 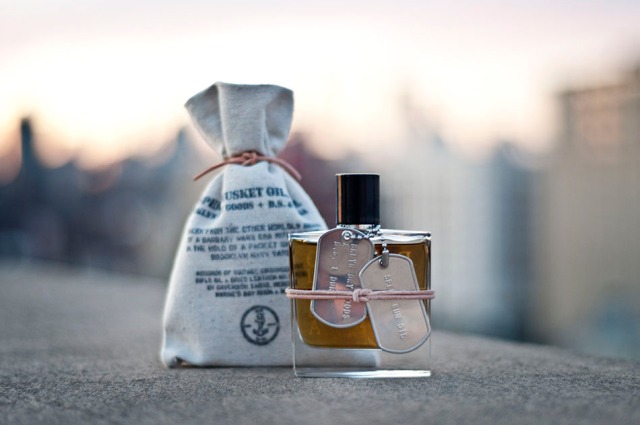 I was fascinated to learn that Uhlendorf and Hall had just collaborated with another Brooklyn business, D.S. & Durga, on a cologne. Hall told me how they had been scenting their price tags with a combination of scents they created themselves. Ulrich Lang, one of the cofounders of Elements Showcase and a perfumer himself, smelled them and was intrigued. Lang introduced them to D.S. & Durga’s David Moltz and Kavita Ahuja, and they worked together to create a new fragrance based on Hall and Uhlendorf’s desire for something masculine and outdoorsy. Spent Musket Oil, the result, is certainly that.

Spent Musket Oil is similar to D.S. & Durga’s Burning Barbershop in its smokiness. It comes on like a smoky eucalyptus, with notes of leather and tobacco and hints of vanilla and clove. A hour or two in, it’s more spicy and the smoke is slightly more subtle. That spiciness is probably the bay rhum.

According to the press materials, “Spent Musket Oil takes its cue from the other-worldly aroma of a Barbary wars-era rifle found in the hold of a packet ship in the Brooklyn Navy Yards with accords of vintage birchwood, spent rifle oil, and dried leather hilt warmed by Cavendish tabac, Merchant Marine’s bay rhum, and musk.”

Initially, I wondered if maybe Spent Musket Oil was too close to Burning Barbershop. In my memory, they were almost the same fragrance; I was quite wrong. By comparison, Burning Barbershop (which I reviewed almost exactly a year ago) is brighter, with lavender, mint and vanilla—like someone added a dose of smoke to Caron’s Pour un Homme. I think I smell a little bit of vetiver in Burning Barbershop, too. The light freshness of the lavender and vanilla (the mint is fairly subtle) plays off the weight of the smoke notes, which probably come from birch tar oil. 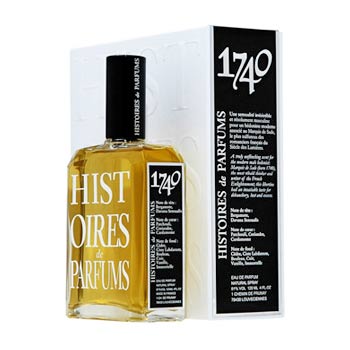 Spent Musket Oil as a whole is much heavier and spicier. I would put it in the family of Histoires de Parfums’ 1740, a spicy tobacco leather. With 1740 though, the tobacco note is brighter and sweeter, more ambery. And it’s less smoky.

What perhaps excited me most in talking to BKLYN Dry Goods’ Hall was that he’d connected this fragrance to a favorite cocktail at a bar in Williamsburg, Brooklyn. It’s quite gratifying to hear other people making the connection between cocktails and cologne. It’s called Salt & Ash and it was created by the Counting Room’s Maks Pazuniak. According to cocktail writer Robert Simonson, it’s Chichicapa Mezcal, Grapefruit-infused El Jimador Blanco Tequila, Lapsang sweet vermouth, Maraschino liqueur, agave, Angostura bitters and orange bitters. Seeing the ingredients listed, I can easily see how this could be a great influence for a cologne. There’s citrus in the form of grapefruit and orange, smoke both in the mezcal and the Lapsang souchong tea-infused vermouth and an almost minty cherry-almond flavor from the Maraschino. And finally, the tequila gives it an earthy, vegetal quality. 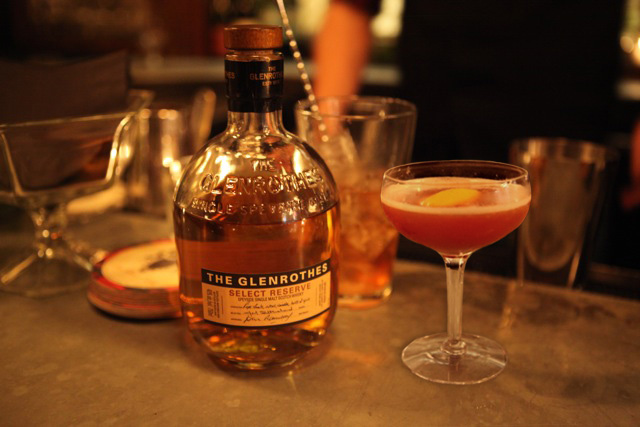 Another cocktail that this reminds me of, a much simpler one, is the McQueen, a scotch and mezcal concoction by bartender John McCarthy at Mary Queen of Scots in the Lower East Side. It’s easy to replicate at home with any blended scotch and mezcal, but McCarthy uses Glenrothes Select Reserve single malt scotch and Fidencio mezcal:

If I were to create a cocktail out of Spent Musket Oil, I would start with a good amber-hued rum and add a touch of Fernet Branca. I’d try sweetening it with some smoked agave syrup and give it some depth with Angostura bitters. I don’t know if that would work, of course, but those are the ingredients that come to mind when I smell Spent Musket Oil.