Skaalvenn Distillery: “No One Should Pay a Premium for Vodka or Un-Aged Rum”

Posted on June 16, 2016 by cocktailsandcologne

Tyson Schnitker is one of the most thoughtful distillers I’ve met. He’s also one of the warmest. Schnitker, who owns the Skaalvenn Distillery with his wife Mary, makes vodka and rum in a small warehouse space in an office park in the Minneapolis suburb of Brooklyn Park. He’s price-conscious in the best way: “I don’t think anyone should pay a premium for vodka or un-aged rum,” he told three spirits aficionados on a recent tour. Both the vodka and the rum retail for around $20 (750ml). Prices this reasonable are rare in craft spirits – particularly when the product and packaging are this good. 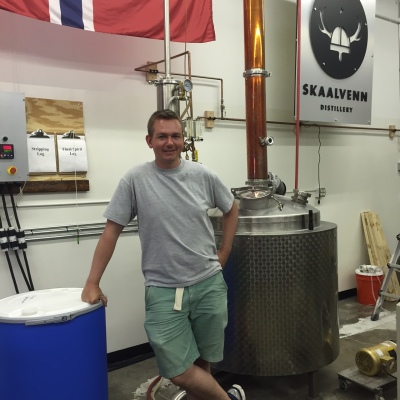 Skaalvenn launched about a year ago, and hasn’t slowed down since. The Schnitkers produce as much as they can, with demand strong for both rum and vodka. Asked why they chose Brooklyn Park (Skaalvenn is the suburb’s first distillery), he explained that it was about money and convenience. He and his wife live nearby, and when they did the math for Minneapolis rent and the gas to drive there and back (accounting for frequent trips to the hardware store during set up), it was clear that they’d save thousands by building closer to home.

The rum is made from unrefined cane sugar bought from a Louisiana sugar mill (according to Schnitker, the northern-most cane fields in the world). The vodka is made from Minnesota-grown wheat, which was much harder to source. Schnitker wanted to use wheat as opposed to corn (which would have been easier to find in Minnesota) because he prefers the smooth flavor the grain imparts. After a frustrating search, a friend suggested he place an ad on Craigslist. Though incredulous, Schnitker posted a plea for local wheat, and was shocked when he got a swift reply: a farmer in Benson, Minnesota had been growing wheat intended for Shakers Vodka (which went bankrupt in 2012) and was thrilled to find another local spirits producer in need.

As Heavy Table announced recently, Skaalvenn will soon release its third product: aquavit. It’s a natural fit for a brand that means “cheers” and “friends” (skaal and venn) in Norwegian. This aquavit will be bottled at 100 proof (50% abv), which is a nod to the cocktail scene – bartenders and cocktail enthusiasts prefer a higher proof spirit to stand up to the dilution of ice. The formula will be traditional, and when we tried it, we agreed with Heavy Table’s comparison to aquavit by Duluth-based Vikre, as opposed to a Gamle Ode. But when we sampled the spirit, the formula wasn’t quite finished. “It’s 85% of the way there,” Schnitker told us during the tour. 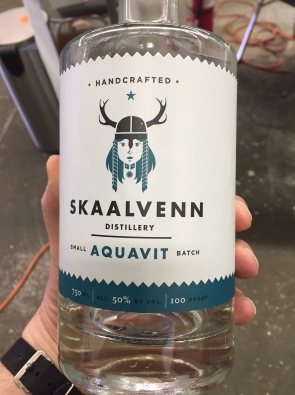 The goal is a traditional aquavit, but one with bolder flavors than others he’d sampled in the market. He’s using the infusion method, rather than redistilling with the botanicals.

“Being traditional, the ingredients are very basic,” Schnitker told me in an email later. “Organic fennel, caraway, and orange peels along with a blend of toasted and charred American oak spirals.”

You can’t tell from the photo at left because the bottle is empty, but the aquavit has a slight amber hue from the oak infusion.

There’s also a secret ingredient that he plans to add to the final formula. “It was inspired by my trip to Cambodia earlier in 2015 and it’s local to that region. The ingredient takes a back seat compared to the rest of the flavors, and I doubt anyone will ever be able to tell me with certainty that it’s there. What it really does is it completes the palate and mouth-feel of the aquavit; I can tell a difference between it being there and not and that’s all I aim for with it.”

However, Schnitker is adamant about not adding tiny amounts of “B.S. ingredients,” just to to be able to say they’re part of the recipe.

The aquavit will be in Minnesota stores early this summer and will probably retail for around $29.

This entry was posted in Uncategorized. Bookmark the permalink.